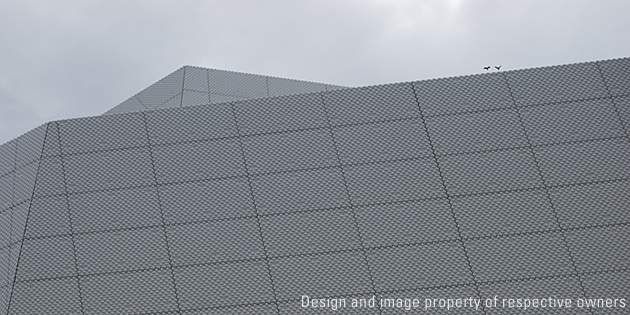 Architectural innovation comes to Africa. Built 40 years ago, the Palais des Congrès of the Hôtel Ivoire in Abidjan (Ivory Coast) was renovated to incorporate innovative architectural traits with new applications in materials and technologies. The whole façade (over 7,700 square metres) of the Palais des Congrès is made with special, customised panels made with DuPont™ Corian® solid surfacing material selected for both its aesthetic and functional properties. The panels made with Corian® feature a complex three-dimensional decorative pattern, reproducing the relief motif of the original façade in ceramic tiles, applied via advanced computer-controlled and forming machines.

This project was the largest ever external cladding project made with Corian® and one of the largest commercial projects ever developed since the invention of DuPont™ Corian® solid surface.

“The design challenge was to reproduce the sandstone tiles looking like African bas-relief without changing the overall look of the façade, ensuring continuity with the initial architecture,” said architect Pierre Fakhoury. “I have been charmed by the modernity, the flexibility, the sensorial qualities and the technical capabilities of DuPont™ Corian®.”

Encompassing 750 rooms, conference facilities and leisure equipments, the building complex of the Ivory Hotel with its futuristic and sober architecture is one of the most important hotel facilities in Africa. Neighbouring the Ivory Hotel, the Palais des Congrès is ideal for colloquiums, seminars or other meetings and is an integral part of the complex.

The French firm Créa Diffusion, one of the most experienced and advanced companies worldwide in the fabrication of DuPont™ Corian® solid surface, was involved in the project since its inception, developing prototypes of 3D panels in its manufacturing site located in Solgnes, France.

Made with different colours of DuPont™ Corian® and assembled with dilatation seams, the prototypes went through tough and specific testing programs which lasted several months and included the direct exposure to weathering agents in outdoor environments. At the end of the testing program, architect Pierre Fakhoury selected the Cameo White colour for the panels.

The three-dimensional-patterned Corian® panels made were fabricated at the end of 2008 in the new Créa Diffusion factory.